How Much of US Electricity Comes From Natural Gas? 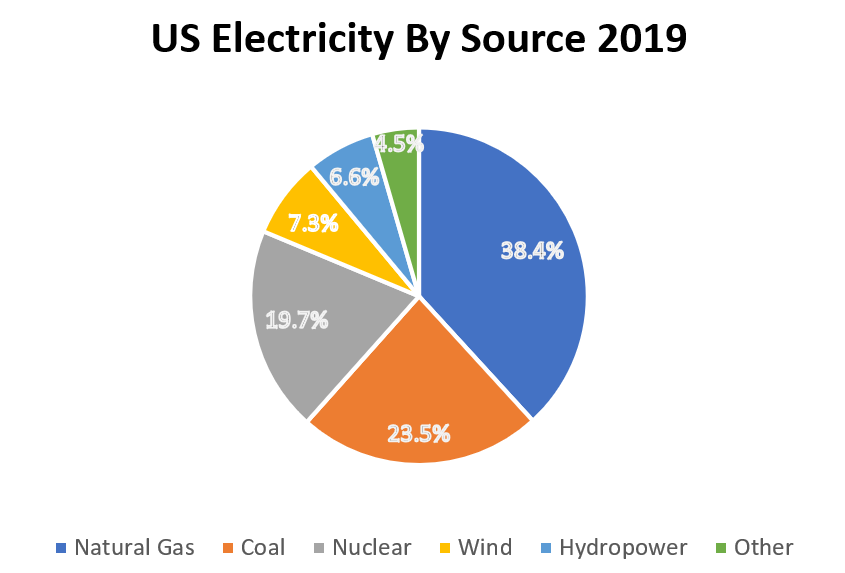 So, how much of the U.S. electricity comes from natural gas? Let’s take a look at the facts. In 2017, natural gas-fired electric generation in California accounted for almost 47 percent of total in-state generation. With a share of 35%, natural gas accounted for over a third of the state’s total Power Mix in 2017.

In the last decade, the United States has been making huge strides toward green energy, but coal has been losing market share. Last year, natural gas overtook coal as the leading source of electricity in the U.S. Coal accounted for more than half of all electricity generation in 2008, but it has steadily declined to 30 percent in 2018, compared to 34 percent in 2017.

The United States is among the top producers of natural gas in the world. Natural gas plants in Louisiana and Oklahoma generated 34 percent of the nation’s electricity in 2017, while coal-fired power plants provided just nine percent. In New England, wind power has become a major source of electricity, with Maine leading the way. Renewable energy sources such as wind power contribute about 17% of the total US electricity generation.

The shift from coal to gas has been mixed for the climate. While gas use has reduced CO2 emissions from the power sector, methane leaks during the production and transport of the fuel offset some of that reduction. At the same time, gas use ties up the US in continued use of fossil fuels. According to the EIA’s spreadsheet, 63% of U.S. electricity production is now generated by natural gas, and the remaining 20% comes from wind and solar.

In addition to natural gas, coal still dominates the electricity generation sector in the U.S. Although switching from coal to natural gas has helped lower emissions and pollution, the switch to natural gas will not be enough to keep emissions at levels that will prevent dangerous global warming. There are other ways to reduce emissions. You can consider the state-by-state comparison on the map above. You can choose to view the country according to fuel type, or zoom in to each state separately.

In 2007, the U.S. electricity grid looked very different than it does today. Coal generation peaked in 2007 and has since dipped by about 40%. Renewable resources such as wind and solar generate only a fraction of the nation’s electricity, contributing only 7.3 percent of total production at utility-scale plants. Despite the decline in coal generation, natural gas will continue to grow, taking coal as a distant second.

In addition to natural gas, other fossil fuels, such as coal, also play a role in electricity generation. According to the U.S. Energy Information Administration’s Monthly Energy Review, coal accounted for approximately 20% of U.S. electricity in 2021. Although coal-fired power plants use steam turbines, they rarely convert coal to natural gas for use in gas turbines. In addition, petroleum and coal represented less than one percent of U.S. electricity production in 2021.

The majority of U.S. electricity generation comes from fossil fuels. As of 2010, coal accounted for 68% of electricity generation capacity. In addition, non-hydro renewable sources such as natural gas and solar have increased substantially over the past decade. While natural gas and renewable energy sources have replaced coal, they have not replaced all of it. Renewable energy sources also include nuclear power and geothermal power.

Californians should not underestimate the importance of hydroelectric power. Last year, the state experienced the 34th driest year on record. The drought returned in 2018, resulting in a significant reduction in hydroelectric generation. Monthly hydroelectric generation was below historical averages in all but April and September. Consequently, California is moving toward a zero carbon energy standard. It has also committed to phase out coal-burning plants by 2045.

In 2001, coal provided the majority of the electricity in the U.S., but that share has decreased over the last decade as natural gas has gained share. Last year, coal-powered generation dropped below nuclear for the first time in two decades. In Texas, natural gas and nuclear power have become the top sources of electricity since 2001, but coal still has a share of nearly half. In California, nuclear and natural gas provided less than a third of the electricity last year.

In the early 2000s, the Seabrook nuclear power plant became the state’s largest generator, accounting for about a fifth of the state’s total electricity. Since then, the state has been switching from coal to natural gas to meet its renewable energy goals. This has reduced the amount of coal-generated electricity in the state dramatically, and by 2030, utilities will have to get at least 25 percent of their electricity from renewable sources.